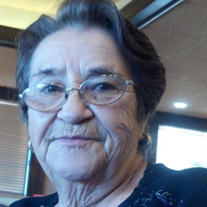 Connie Herrera, 84, our loving and devoted mother, grandmother and friend to all whose lives she touched, sadly passed away on May 3, 2020. She left us peacefully, surrounded by family in Pueblo, Colorado. She was born in 1936 in Alamosa to parents, Clovoveo and Graciela Aragon. Connie lived a full life as a wonderful mother, homemaker and worker in the food service and caretaker sector. She loved to cook, keep an immaculate house, active in her church, play bingo, loved music and dancing and spending time in her garden. Connie was known for being a mother to all she encountered. She always made time for everyone by providing support and love. She worked tirelessly to provide a comfortable home, which was filled with her favorite desserts and homemade comfort foods. She was known to have displayed her devoted love and youthful sassiness equally. Predeceased by her devoted husband of 40 years, Alfred Herrera; daughters Patsy Martinez and Dianne Herrera; son in Law, Kenneth Carlson; sister Dela Aragon; and brother David Aragon. Survived by her children Adam Herrera, Christine Herrera, Alfred “Willie” Herrera (Sherry); grandchildren, Teddy (Lina) Martinez, Alisha (Sergio) Martinez, Shane Herrera, Rhonda (Aaron) Alexander, Stephanie Herrera, Alfred Arellano, Moses Herrera, David (Brandy) Herrera, Lawrence (Brandi) Lopez, Adrian Herrera, Jayden Herrera, Lici Barela, Helen (Ralph) Soto and Bryan (Jessica) Arellano; dearest family friend, Diana Aragon; godson, Jim (Darlene) Sandoval; goddaughter, Gigit Culvertson; adopted son’s Dave Barela and Russell Urruita; 18 great-grand children as well as multiple adopted grandchildren, nieces, nephews and extended family members. Burial services will take place Tuesday, May 12 at 11:00 am. Due to the Covid-19 pandemic, burial services will only be available to immediate family members. We will be driving by Connie’s home at 10:15 am. A rosary and celebration of her life mass will be held at a later date.

Connie Herrera, 84, our loving and devoted mother, grandmother and friend to all whose lives she touched, sadly passed away on May 3, 2020. She left us peacefully, surrounded by family in Pueblo, Colorado. She was born in 1936 in Alamosa to... View Obituary & Service Information

The family of Connie Herrera created this Life Tributes page to make it easy to share your memories.

Send flowers to the Herrera family.