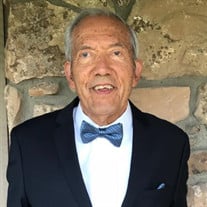 Albert Palacio, 87, of Pueblo West, passed away on January 4, 2022. He was born on October 5, 1934, in Segundo, Colorado, the eighth of parents Ascencion Perez Palacio and Quintin Palacio’s nine children. Albert spent the early part of his childhood in the coal-mining towns of southern Colorado, including Trinidad. In 1949, eldest brother Peter orchestrated the family’s move to California in search of greater job opportunities, settling in San Francisco, where Al attended Balboa High School one year ahead of his youngest brother Bob and played on the football team. After high school, Al found employment putting his natural writing talent to work as a ​sportswriter for the San Francisco Examiner. Later, like the rest of his brothers, he enlisted in the U.S. military, serving honorably in the Army for two years in active duty and two years in the reserves, becoming a marksman in the rifle and carbine. At some point, he decided to go to college back East to obtain his law degree and graduated from Suffolk University in Boston at the end of the 1960s with his Juris Doctor. San Francisco was Al’s home for seven decades and he embraced its many charms—the theater and opera, the top-tier sports teams, the restaurant and cocktail scene, the almost fantastical natural beauty of it, and even—or especially—the weirdness. And he walked: walks in Golden Gate Park; walks around the Hall of Justice on his lunch hour at work. He so loved theater and opera. He became an extra in a number of stage productions, complete with lavish costuming, makeup, and wigs. He regularly had tickets to Oakland A’s games. He seemed to know and appreciate that he lived in the City during its best years and never took it for granted. Al settled in with the Adult Probation Department of the City and County of San Francisco, spending more than 25 years as a highly respected Senior Probation Officer in the Court’s Drug Unit before retiring in 2000. In 2015, the nature of his retirement changed when a fortuitous meeting with a never-met second cousin—Frank Palacio—set him on a new journey at the latter stage of his life, bringing him back home full-circle to southern Colorado and to the bosom of another Palacio family by February of 2016, where he lived out the remainder of his life among family. Albert was charming and urbane, astoundingly articulate in speech and on paper, thoughtful and reflective, sentimental and spiritual, cool-cat city boy and street tough, and a devoted and much-loved son, brother, uncle, and cousin. Preceded in death by his parents, Ascencion Perez Palacio and Quintin Palacio, and his siblings, Amalia Palacio, Peter F. Palacio, Maria Palacio, Mario Palacio, Juanita Jennie Palacio, Quintin B. Palacio, Joe Palacio, and Robert J. Palacio, Albert John Palacio is survived by his nieces and nephews, Michelle Palacio, Lisa Palacio, Steven Forrest, Chuck Forrest, Mike Forrest, James Forrest (Julia), and Jennifer Forrest; his sister-in-law, Ruth Palacio; his brother-in-law, George Forrest; his cousin, Frank Palacio (Shirley); his second cousins, Frank Palacio, Tammy Palacio, Julie Palacio, Rick Palacio (Graham Kaltenbach), and Lisa Padilla (Randy); his devoted friend, Ana María Rocha; his former partner, Brenda Lingier; and a host of other friends and extended family who will dearly miss him. There will be a private graveside burial, with full services to be held at a later date.

Albert Palacio, 87, of Pueblo West, passed away on January 4, 2022. He was born on October 5, 1934, in Segundo, Colorado, the eighth of parents Ascencion Perez Palacio and Quintin Palacio&#8217;s nine children. Albert spent the early part of... View Obituary & Service Information

The family of Albert Palacio created this Life Tributes page to make it easy to share your memories.

Send flowers to the Palacio family.