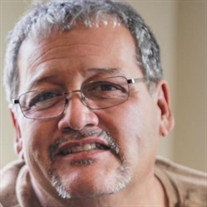 Robert D. Chavez, 63, Pueblo West, passed away December 17, 2021. He was born October 26, ​1958, to Henry and Esther (Martinez) Chavez in Denver, Colorado. Robert was a Denver native; he grew up and lived in Denver for 39 years before moving to Pueblo with his wife and youngest daughter. Robert recently retired from the Pueblo West Metro District where he worked as an equipment operator. Before working for the PWMD, his career as a professional truck driver spanned 35 years. Robert had a strong work ethic and in addition to his regular job he usually had a side “hustle” to make extra money. He loved to attend yard sales and auctions and wheel and deal for a profit. Gambling was his favorite hobby; he would sit on the porch with a cold beer and scratch tickets and when he felt lucky it was time for a trip to the casino. He enjoyed cooking for special occasions and his carne adovada brought everyone home when he made a pot. He loved to joke and tease and make people laugh. He adored his grandchildren, bragging about them constantly. He was in old fashioned terms “a family man”. The true patriarch who held his family close with all the love and support he could provide. Robert is survived by his wife of 32 years Bernadine (Villanueva) Chavez, children, Joette (Chris) Salazar, Fred Carrillo, Dolores (Derrick) Duran; grandchildren Arianna, Amia, Alija, Penelope, Isaiah, and Maximiliano. His mother, Esther Montoya; sister, Roberta (Steve) Lujan; his cousin, Roger Chavez who was like a brother to him; brother-in-law Nathan (Osiris) Villanueva, sister-in-law Andrea (Anthony) Villanueva, numerous nephews and nieces and cousins. Memorial Service, 11:00 am, Friday, February 25, 2022, Eagleridge Event Center, 805 Eagleridge Blvd., Suite 170, Pueblo Colorado.

The family of Robert D. Chavez created this Life Tributes page to make it easy to share your memories.

Send flowers to the Chavez family.