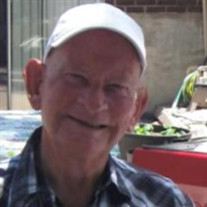 Rex Raymond Critchfield, 85, of La Junta, passed away on December 4, 2021. He was preceded in death by his wife, Janet Mae; parents, John William and Hattie Vieva Critchfield; brothers, Jacque Lewis, Max Grover, George William and John William Jr.; sisters, LaVetta, Etta and Beatrice. He is survived by his sons, Calvin (Elizabeth) and David (Merlinda); grandchildren, Janet (Chris) Carrillo, Calvin (Tanya) Critchfield Jr., David Critchfield, Misty Critchfield, John Critchfield, Emily (Kashif Khan) and Samuel Torres; great grandchildren, Alexis, Kaden, Mia, Jett, Chloe, Reese, and Isadora; numerous niece and nephews; extended family and friends. Rex began playing guitar at the age of 12 and played lead guitar in to his 80’s. He was a great mechanic and taught his sons how to overhaul and engine and keep their vehicles running. He was the hardest worker we knew and he was always willing to help anyone else. Rex was very unselfish and would put his family and others first. He loved our God and Savior and would want his family and friends to celebrate his life and not spend all their time grieving or getting depressed about his passing. We want to give tribute to the kindest man we ever knew. He will be forever loved and deeply missed by all those he leaves behind. Funeral Service, 10:00 am, Monday, December 20, 2021, Arkansas Valley Seventh Day Adventist Church, La Junta, CO. Interment to follow, Fairview Cemetery, La Junta, CO.

The family of Rex Raymond Critchfield created this Life Tributes page to make it easy to share your memories.

Rex Raymond Critchfield, 85, of La Junta, passed away on December...

Send flowers to the Critchfield family.