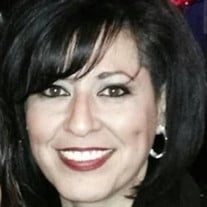 Pamela Frances Gonzalez, 46, of Pueblo, beloved mother of Samantha Gonzalez and Thomas Pencis, passed away peacefully on August 17, 2020 surrounded in love by her family. Pam was preceded in death by Ralph “Blackie” Gonzalez, Caroline Cisneros, Armando S. Rodriguez, Rudy “Buster” Vasquez, and Melissa Arriaga. Pam was born on March 9, 1974 in Fort Ord, California, returning to Pueblo as an infant. She was a devoted mother to Sammie and Thomas, a loving daughter to Christy (Cisneros) and Kenny Gonzalez, sister to Nadine Gonzalez Rodriguez, and aunt to Armando Rodriguez. Pam was a Centennial High School graduate (1992) and then continued her education at PCC, completing a LPN Associates Degree. She was a vibrant staple of The Favorite Tavern, where she bar tended for many years. Pam was also a U.S. Armed Forces veteran, serving in the US Army, stationed in Anchorage, Alaska. As an LPN, Pam worked as a nurse for over 18 years giving comfort and care to countless patients and their families. Pam was known as a beautiful, hard-working, loving mother, sister, cousin, and loyal friend, and, possibly the world’s biggest Prince fan. In life, Pam was always on the go, working two jobs and raising two children, but she always found joy in caring and helping others and bringing an infectious smile and laughter to all. Sadly, Pam was unable to survive stage four metastatic cancer and was lost to us all. Due to Covid-19 limitations, Pam will be remembered in a private, Celebration of Life Mass at St. Mary’s Catholic Church.

The family of Pamela Frances Gonzalez created this Life Tributes page to make it easy to share your memories.

Send flowers to the Gonzalez family.