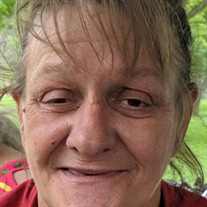 Nikki Leigh Dixon, 48, of Pueblo, passed away on January 29, 2021. She was preceded in death by her son, Dylan Keeth; mother, Dallas Keuten; step-brother, James Montour; and father-in-law, Albert Montour. She is survived by her husband, Raymond... View Obituary & Service Information

The family of Nikki Leigh Dixon created this Life Tributes page to make it easy to share your memories.

Send flowers to the Dixon family.