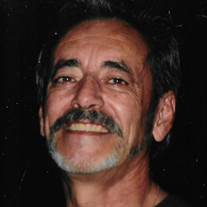 Nick Richard Gonzales, 70, of Pueblo, passed away on April 12, 2021. He was preceded in death by his daughter, Selena Romero; parents, Cedric and Emma Gonzales; sisters, Linda Walker and Charlotte Day; nephew, Daniel Gurule. He is survived by his wife of 32 years, Carol Gonzales; children, Raquel (Luigi Misuraca) Gonzales, Nicky Gonzales Sr. and Chris (Shellie) Gonzales; grandchildren, Jordan, Nicky Jr., Ava, Isabella, Cecelia and AJ; siblings, Cid (Carol) Gonzales and DeeDee (Mark) Goings; aunt, Arcy Herrera; in-laws, Anthony (JoJo) Martinez, David (Angela) Martinez, Peggy (Danny) Gurule and Rita Martinez; godchildren, Nick Heiserman, Brad Gonzales, Brianne Martinez; numerous nieces, nephews and cousins; extended family and friends. Nick was a Jack of all trades with a strong work ethic. He was an avid fan of boxing and the Denver Broncos. He enjoyed working on cars and dancing. He had a great sense of humor and a huge heart which was evident in his love of helping other people. Nick’s battle with cancer started early in life but his passion for life, family and work helped him beat the odds several times. He was a strong family man who loved his family more than anything but most of all he was an amazing grandpa and was happiest when spending time with his grandkids. He will be deeply missed and always loved by those who are left to cherish his memory. The family would like to thank the Sangre De Cristo Hospice and the Palliative Care Staff. Viewing, 2:00-4:30, Monday, in rotations of 10- person, 15-minute increments. Please call Romero’s at 719-583-1313 to schedule a time. Private Family Service, 10:00 am, Tuesday. Interment to follow, Roselawn Cemetery. Service may be viewed through Live stream on Facebook at Romero Family Funeral Home, Pueblo and YouTube at Romero Family Funeral Home Pueblo.

Nick Richard Gonzales, 70, of Pueblo, passed away on April 12, 2021. He was preceded in death by his daughter, Selena Romero; parents, Cedric and Emma Gonzales; sisters, Linda Walker and Charlotte Day; nephew, Daniel Gurule. He is survived by... View Obituary & Service Information

The family of Nick Richard Gonzales created this Life Tributes page to make it easy to share your memories.

Send flowers to the Gonzales family.