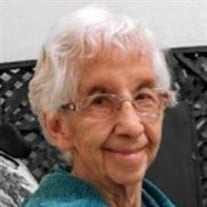 Naomi Vigil, was born on September 3, 1934, and passed away peacefully into the arms of her Lord and Savior Jesus Christ on May 5, 2022. She married Felix Vigil Jr. on November 19, 1950 in Pueblo. They celebrated 71 years of marriage in November and were blessed with three children. Naomi was the youngest of 9 children born to Silverio and Adonaisa Marquez. They lived in Rouse, Colorado where she grew up on a small farm and went to a country school. She was shy as a child but did well in school. While in high school, Naomi met Felix at church. He asked her out for a date and they fell in love. She had just turned 16 years old when they were married. A year later, Job was born. Felix had enlisted in the Army and was sent to Germany for 18 months. Naomi lived with her parents during that time. She had not graduated from high school, so after Jon and Beth were born, she worked hard and earned her GED. Naomi enrolled at Midwest Business College and graduated with a 4.0 GPA, earning a diploma to become a secretary and bookkeeper. She worked several jobs including cleaning the Bon Durant building at night in downtown Pueblo to help pay the bills. She eventually took a job with Pueblo County School District 70 and was a school secretary for many years at North Mesa Elementary where she was loved by the staff and the students. After 24 years of service, she retired and enjoyed babysitting her grandchildren. Naomi and Felix enjoyed collecting antiques and traveling around to estate sales. She was a great cook and loved to feed whoever stopped by for a visit. She was also a great seamstress and enjoyed doing various crafts. Naomi loved unconditionally and whenever Felix would bring someone he found wandering the streets, she would feed them and if necessary give them a bed in which to sleep. She never missed any of her children’s activities even while working full time. She loved her children, grandchildren and great-grandchildren very much. She loved her husband and her commitment to their marriage was firm and they set a good example for all. Most importantly, Naomi loved Jesus and lived her life as an example of that. She was faithful to her church and seldom missed a service, even when services were scheduled 3 to 4 times a week. Naomi was preceded in death by her parents; siblings, Silvio, Gilbert, Alfonso, Faye, Rita, Sophie, Donna and Orpha; other family members. She leaves behind her husband Felix, children: Job (Gail) Vigil, Jonathon (Tobie) Vigil and Elizabeth; grandchildren: Melody (Jerry) Gibson, Jonathon Vigil Jr., Matt Vigil, Adam (Christy) Vigil, Tamara Vigil, Jordan Vigil, Benjamin Vigil, Thomas Vigil and seven great-grandchildren. She will be very missed. Funeral Service, 11:00 am, Monday May 16, 2022, with her son Job Vigil officiating, Romero Family Funeral Home, Pueblo. Viewing prior to service. Interment, 10:00 am, Tuesday, May 17, 2022, Imperial Memorial Gardens. Memorials may be made in her name to be designated later by the family.

Naomi Vigil, was born on September 3, 1934, and passed away peacefully into the arms of her Lord and Savior Jesus Christ on May 5, 2022. She married Felix Vigil Jr. on November 19, 1950 in Pueblo. They celebrated 71 years of marriage in November... View Obituary & Service Information

The family of Naomi Vigil created this Life Tributes page to make it easy to share your memories.

Send flowers to the Vigil family.