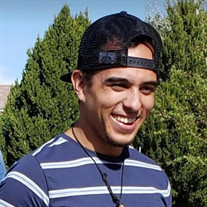 Justin Daniel Sanchez, 29 passed away unexpectedly on September 23, 2021 in Pueblo, CO. He was born on April 17, 1992 in Trinidad, CO. He was extremely amicable and was known for his affectionate smile and vibrant personality. In his youth, he achieved many successes as an athlete and was well known for his competitive spirit and mental toughness, which he demonstrated while participating in football, basketball and baseball. As an adult, he loved and cherished time spent with family, especially his siblings. Discovering a newfound love for the outdoors, he often found peace and enjoyment while fishing, hiking, kayaking, gardening and working on home improvements. He was adventurous and found great joy in cooking and sampling new foods. Justin discovered a way to share his infectious personality when he began his career in the automotive industry. He found his calling in car sales and eventually excelled as the Sales Manager of a local car dealership. He was determined to succeed professionally and took great pride in his work. The passion he had for his career was well apparent and was best displayed in his ability to connect with and serve his customers who often spoke very highly of him. Justin is survived by his parents Daniel and Jennifer Sanchez; his sister Jordan Sanchez and his brother Jeremiah Sanchez. He also leaves his maternal grandparents, Mike and Vanessa Sandoval and his paternal grandparents Al and Betty Sanchez all of Pueblo. He is also survived by numerous aunts, uncles & cousins. Pallbearers: Mike Martinez, Jake Sanchez, Jeffery Cordova and Vance Vasquez all of Pueblo, CO; Cody Sandoval and Chris Sandoval both of Greeley, CO; Nick Mason and Ethan Begano both of Trinidad, CO and Joel Sanchez, Colorado Springs, CO. Flower girls: Laura Sanchez, Veronica Sanchez, Kristin Mason, Jessica Mason, Shannon Sanchez, Maya Sanchez, Teren Sanchez, all of Pueblo, CO; Elizabeth Volkmann, Littleton, CO; Victoria King, Hurricane, WV and Cecily Begano of Trinidad, CO. Rosary, 10:00 am followed by, Mass of the Resurrection, 11:00 am, Friday, Holy Family Catholic Church. Interment to follow, Imperial Memorial Gardens.

Justin Daniel Sanchez, 29 passed away unexpectedly on September 23, 2021 in Pueblo, CO. He was born on April 17, 1992 in Trinidad, CO. He was extremely amicable and was known for his affectionate smile and vibrant personality. In his youth,... View Obituary & Service Information

The family of Justin Daniel Sanchez created this Life Tributes page to make it easy to share your memories.

Send flowers to the Sanchez family.