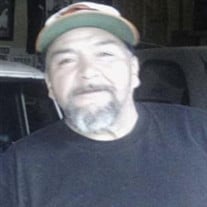 Joseph Paul Trujillo, 55, of Pueblo passed away on April 1, 2020. He was preceded in death by his father, Danny Trujillo; brother, Rick Trujillo; uncle, Manuel Trujillo; grandson, Victor Rubles-Trujillo. He is survived by his mother, Mary Santillan;... View Obituary & Service Information

The family of Joseph Paul Trujillo created this Life Tributes page to make it easy to share your memories.

Send flowers to the Trujillo family.