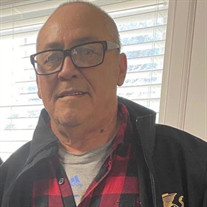 Joseph Arthur Barela Jr (Eastside Joe), 60, passed away April 6th 2020. He is now reunited with his wife Peggy Maez, Son Andrew(Choo-Choo), Parents Joseph Sr and Mary Barela, brother Frank Sr, Brother in-law Ken Casados, brother-in-law Mike Pacheco, and in-laws Johnny and Jennifer Vigil, nephew Frankie Barela, niece Bobbi Jo Barela, and nephew Shawn Vigil. He was survived by his son Carlos (Crystal) daughter Amanda (Andrew) grandchildren, Tayla, A.J, Corie, Aylee, Kylie, And Elizio. Goddaughter Jenny, and bonus daughter Ariana. His siblings Loretta(Mike) Tony, Alvin(Sharon) Linda, Lisa, and Andy(Pierrette). His in laws Charlie and Ernestine Maez, and his brother and sisters-in-law, his 3 bestfriends Joe Alarid, Larry Quintana, And Jim Gurule, and many many special family and friends. He enjoyed going camping, fishing, watching the Denver Broncos, Colorado Rockies, and Denver Nuggets. He used to like throwing some beers back, but was very proud of his sobriety for almost 2 years, and any chance he got he would tell you about it. He had many special friends at The Great Escape, where he would attend every day, he would enjoy going to Sunday service at Praise Assembly. Once you met Joe, there was no way of forgetting him. The family gives thanks for all the messages, phone calls and thoughts they have received. Cremation will take place and a memorial service will happen at a later time.

The family of Joseph Arthur Barela Jr. created this Life Tributes page to make it easy to share your memories.

Send flowers to the Barela family.