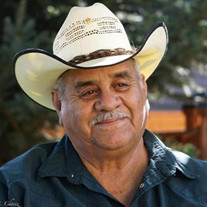 José Octavio Chávez Ochoa, 75, of Pueblo Colorado, passed away peacefully on Friday, March 26, 2021. He was preceded in death by his parents Franciso Chávez Rico and Guadalupe Ochoa de Chávez and his brother Gerardo Chávez Ochoa. He is survived by his loving wife of 48 years, Irene Consuelo Chávez; children, Octavio “Augi” Chávez, Xóchitl Chávez, Gabriela “Gaby” Chávez; grandchildren Danica and Dylan Chávez; siblings Lidia Chávez de Almeida, Victor Chávez Ochoa, Arturo Chávez Ochoa, Hilda Chávez de Gamboa, Nancy Chávez De La O, Jasmin Chávez de Zamarripa, Alonso Chávez Ochoa, and Imelda Chávez; numerous nieces and nephews; and many long standing close friends. José Octavio was born on September 13, 1945 in El Porvenir de Bachiniva, Chihuahua, Mexico. He was very committed to his home community participating in civic services, as well as, embracing and promoting the ranching way of life prior to immigrating to Colorado in 1968. Once in Colorado he continued working on various ranches and farms in the southern region of the state. On July 15, 1972 he married Irene Consuelo (Alires) Chávez in Pueblo, Colorado. In Pueblo he worked in the agricultural sector during the harvest season and then worked laying foundational cement for the Pueblo Reservoir in the winter season. He maintained the relationships that he built early on with the farmers, carrying them into the near present time. José Octavio later became a truck driver and meat cutter. José loved to volunteer in his children’s activities: boy scouts, marching band, MESA, 4H, and being a dance dad with The Guadalupe Dancers. He also continued to help others in pursuing their citizenship. Outside of family and work he was extremely passionate about horses, hunting with friends and family, dancing, and sharing brain teasers, riddles, jokes, and attending church with friends. Civically, he was active with the Pueblo Charro Association, Federal Order of the Eagles, and acted as a delegate traveling to the sister city of Puebla, Mexico. He was the consummate entertainer and friend. If you met him you were only a stranger once. José Octavio Chávez-Ochoa will be missed dearly. May He Rest in Peace. Viewing, 12:00-2:30, followed by Rosary, 2:30 pm, and Funeral Service, 3:00 pm, Monday. Service may be viewed through Live stream on Facebook at Romero Family Funeral Home, Pueblo and YouTube at Romero Family Funeral Home Pueblo.

José Octavio Chávez Ochoa, 75, of Pueblo Colorado, passed away peacefully on Friday, March 26, 2021. He was preceded in death by his parents Franciso Chávez Rico and Guadalupe Ochoa de Chávez and his brother Gerardo Chávez Ochoa. He is survived... View Obituary & Service Information

The family of Jose Octavio Chavez created this Life Tributes page to make it easy to share your memories.

Send flowers to the Chavez family.