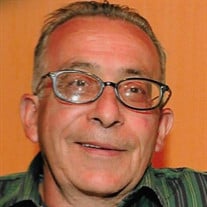 Joe “Joseph”, “Sonny” P. Vigil, Jr, 71, of Pueblo CO went to be with the Lord on August 14, 2020. He passed away peacefully at his home surrounded by his loving family. He was born on January 8,1949 to the union of Joe P and Trinidad Montoya) Vigil. He proceeded in death by both of his parents Joe and Trinidad Vigil, his in-laws Dionisio and Beatrice Vialpando, and his grandson Joeziah Vigil. He is survived by his loving wife Judy Vigil, they were married for 48 years. Also survived by daughters Yvette (Thomas) Solano,Jr., Heather Vigil (Ruben Romero), all from Pueblo CO, his grandsons Tommy Solano, Joey Solano, and Anthony Vigil, all from Pueblo CO. Also survived by siblings Ida, Naomi, Inez, Lorraine, Eunice, Janet, Wilfred, Billy and Rory along with numerous nephews and nieces. Joseph served in the US Navy and was in the Vietnam War. His hobbies included fishing, hunting, going to cripple creek , telling jokes and enjoying time with his family and friends. He was a great hard worker who always provided for his family. He will always remain in our hearts and be greatly missed.

The family of Joe "Sonny" Vigil Jr. created this Life Tributes page to make it easy to share your memories.

Send flowers to the Vigil family.