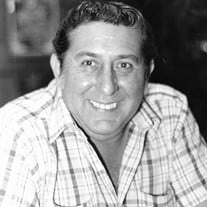 Mr. Joe J. Lujan, a lifelong resident of Pueblo, CO, sadly passed away on August 25, 2020 at the age of 78 years old. Joe Lujan was born on May 2, 1942 in Jaroso, CO to Agapito and Josephine Lujan in an adobe house with assistance from a mid-wife. Joe was the second youngest of nine children. Joe graduated from Aguilar High School in 1961 and moved to Pueblo, CO in October of 1963. During his senior year, he received an athletic scholarship but chose to work and start a family. Joe held many job titles throughout his life such as Shipping Clerk, Frog Builder, Punch Press Operator, Cold Saw Operator, Crane Operator, Carbide Saw Operator, and was known as a jack-of-all-trades. He retired from American Brake Shoe/ABEX/ABC Rail on June 10, 1988, after 25 years of dedicated service and an abundance of hard work. While he worked full time, Joe was also a landlord from 1970 – 2015. An addition, he worked part time at the Pueblo Greyhound Dog Track selling ticket and as a cab driver to provide for his family. After retirement, Joe cherished spending time with his children, grandchildren, family, and friends. He adored watching his children and grandchildren play sports and loved being outdoors especially while deer and elk hunting, fishing, going to the “high country” to be close to nature, vacationing with his children, taking great care of his green lush lawn, and being a top poker player. Joe was an avid Denver Broncos, Denver Nuggets, and Colorado Rockies fan. He rarely passed up an opportunity to watch football, basketball, baseball games as well as watching Gunsmoke, The Virginian, Bonanza, and The Wheel of Fortune. Joe was a member of the Eagles Lodge #145 in Pueblo, CO for many years. Joe is survived by his loving children: Brian Lujan of Pueblo, CO, Brenda (Andrew) Miazga of Niceville, FL, Natalie Jo (Steve Medina) Lujan, and Karl (Emily-Jane) Lujan, both of Pueblo, CO. “Papa Joe” had eight grandchildren: Ariana Lujan, Claire Miazga, Cora-Jane Aubert, Jonathan Lujan, Vincent Miazga, Benjamin Miazga, Jacob Lujan, Declan Lujan, and a great-grand daughter, Olivia Lujan. Joe was blessed to have been loved and admired by many nieces, nephews, extended family, and friends. Joe maintained a cordial relationship with his former wife and mother of his children, Phyllis Tamburelli. Joe is proceeded in death by both parents, Agapito and Josephine Lujan, and his siblings; Christiana Ortiz, Ascension Sanchez Elvira Lujan, Pete Lujan, Maria Lujan, Refugio Estella Scritchfield, Irene Torres, and Adolfo Lujan, Memorial viewing will be held on Thursday, September 3, 2020 from 12:00 pm – 5 pm at Romero’s Funeral Home, 110 Cleveland Street, Pueblo, CO, (719) 583-1313. Due to COVID-19, invitation only to the viewing is and limited to 10 persons per appointment. Masks are required. The Rosary will be recited in Joe Lujan’s honor prior to the Funeral Mass on Friday, September 4, 2020 at 10:30 am at St. Mary’s Church, 217 East Mesa Avenue, Pueblo, CO. Due to COVID-19, there is a person limit on the number of invited attendees and will be arranged by family coordinators. Masks are required. Live video steaming will be available on Facebook and YouTube at Romero Family Funeral Home-Pueblo. Graveside services will take place at Imperial Memorial Garden Cemetery, 5450 Highway 78 West, Pueblo, CO. Invited attendance is limited and masks are required when social distancing is not possible. Details of the celebration dinner will be announced after the interment. The family would like to extend special thanks to Dr. James Stjernholm, nurses Shirley and Rhonda, Linda Jackson, N.P., Dr. Travis Archuleta, Dr. Charles Stout, and Arikare Homecare especially Erika, Irene, Olivia, Nolan, and Amy, in taking great care of our loving and strong father. Special thanks also extended to Father Mark Del Rosario, Romero’s Funeral Home, and Imperial Gardens. Condolences and flowers should be sent to Romero’s Funeral Home.

Mr. Joe J. Lujan, a lifelong resident of Pueblo, CO, sadly passed away on August 25, 2020 at the age of 78 years old. Joe Lujan was born on May 2, 1942 in Jaroso, CO to Agapito and Josephine Lujan in an adobe house with assistance from a mid-wife.... View Obituary & Service Information

The family of Joe J. Lujan created this Life Tributes page to make it easy to share your memories.

Send flowers to the Lujan family.