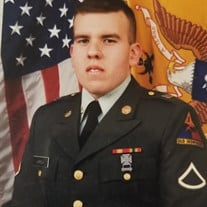 Jaime Urrea, 45, of Pueblo, Colorado, went to be with the Lord Jesus Christ on July 18th, 2019. Jaime was born to Jose and Norma Urrea on March 28th, 1974, in Santa Paula, California and was raised in Fillmore, California. After graduating from Fillmore High School in 1992, he eagerly enlisted in the U. S. Army where he was sent to Kentucky for basic training. He was stationed in Germany for a short time where he enjoyed the mountains and greenery so much that he chose Ft. Carson in Colorado Springs, Colorado as his next destination. After completing his first term of service, he chose not to reenlist in the Army and was Honorably discharged in 1996 with the Army Good Conduct Medal, National Defense Service Medal, the Overseas Service Ribbon and other honors. While in Colorado Springs, he met and made a lot of friends including former wife Dianna Lucero Urrea, and then he moved to Pueblo, Colorado in 1997. Jaime’s love was to always Protect and Serve. After graduating from the Police Academy in Pueblo, he attended school to become a police officer while working as a security guard at Trane, Inc. After several years there, he continued wanting to pursue a career as an officer, and since being a police officer wasn’t an option, Jaime embarked on a career as a Correctional Officer. Upon successfully completing his testing and training, he began his Correctional Career at Arkansas Valley Correctional where he worked several years until the daily commute was becoming tiresome. When the opportunity arrived, he transferred to Pueblo where he worked at San Carlos, La Vista and then the Youth Offender System. His motto in life was to Always Protect and Serve!! And he was always a fighter. Jaime is survived by his parents Jose and Norma Urrea, older brother’s Joey (Araceli) Urrea, and Jorge Urrea, nephew Andre(Rachelle), niece Alyss and great niece Mila. Also survived by former wife Dianna Urrea and 4 legged children Kita and Shyla, in laws Gilbert and Rose Lucero, many Aunts, Uncles, cousins, and many many friends. Jaime loved his music and especially “Kiss” and enjoyed playing his drums. Jaime was always the first to lend a helping hand and was always gentle and kind. Jaime had a heart of Gold and loved his family and friends. He will be tremendously missed as he kept long lasting friendships wherever he went. A Celebration of his Life with Military honors, will be on July 29th at 10:00 a.m. at Romero’s Funeral home. Reception to follow in the hall with snacks and finger foods. Jaime loved sweets. A special Thank You to the Colorado Department of Corrections for all their support.

Jaime Urrea, 45, of Pueblo, Colorado, went to be with the Lord Jesus Christ on July 18th, 2019. Jaime was born to Jose and Norma Urrea on March 28th, 1974, in Santa Paula, California and was raised in Fillmore, California. After graduating from... View Obituary & Service Information

The family of Jaime Urrea created this Life Tributes page to make it easy to share your memories.

Send flowers to the Urrea family.