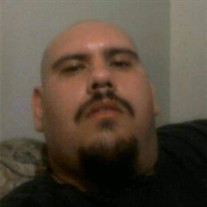 Jacob Isaiha Nunez, 40, of Pueblo, passed away on March 8, 2021. He was preceded in death by his mother, Carolyn Mondragon; grandparents, Helen, Fred, Jimmy, Ida, Greg, Paul and Vicky; and cousin, Jared. He is survived by his father, Ronald... View Obituary & Service Information

The family of Jacob Isaiha Nunez created this Life Tributes page to make it easy to share your memories.

Send flowers to the Nunez family.