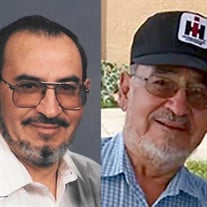 Frank Trujillo passed away peacefully on Tuesday, August 25, 2020 surrounded by family. He was born on January 21,1941 in the now-extinct mining town of Tioga, Colorado. He was raised in Gardner, Colorado and went to a one-room school house... View Obituary & Service Information

The family of Frank Trujillo created this Life Tributes page to make it easy to share your memories.

Send flowers to the Trujillo family.