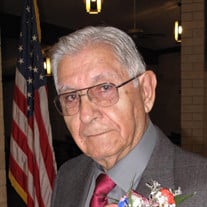 Ernest C. Roybal, 89, of Pueblo, went to be with the Lord on January 18, 2021. He was preceded in death by his loving wife of 55 years, Norma Roybal; parents, Juan B. Roybal and Clorinda Lobato Roybal; step-son Patrick Martinez; sisters, Eloisa, Emma and Madeline; brothers John and Eddie. He is survived by his loving wife of seven years, Aurora Roybal; children, Ronald (Betty) Roybal, Gary Roybal, Stephanie (Carrol) Chataignier, and Mark (Julianne) Roybal; step-children: Della (Joe) Russo, Diane DeHerrera, Ted Martinez, David Martinez, Mike Martinez, Michelle Ponce, Paul Martinez and Gloria Sandoval; grandchildren Jessica (Joseph Montoya), Ryan and Jacob; great-grandchildren Alissa, Makyla and Xavier; siblings, Orlando Roybal, Dr. Evangeline (Val) Sena, Gloria (Phil) Covarrubias; sisters-in-law Marcella Roybal and Margaret Roybal. Ernest was born and raised in the Ft. Garland/ Blanca area of the San Luis Valley. He was a loving and devoted husband and father. He had a deep faith in the Lord and was a Lecturer and Catechist for many years at The Shrine of St. Therese and St. Joseph Catholic Churches in Pueblo. Ernest was a friend to all and considered whoever he met to be a stranger only once. He graduated from Adams State College in Alamosa in 1954 with emphasis in Education. He entered the US Army after graduation and became expert at writing technical manuals. Upon his exit from military service, Ernest began his teaching career of 33 years beginning in the San Luis R-1 School District and later District 60 in Pueblo, where he taught at both Minnequa Elementary and Corwin Middle Schools. He was very proud of being one of the founding members of the Pueblo Congress of Hispano Educators. He is remembered by many students as being a caring teacher who always had a great story to share. Ernest was always busy working on cars, building projects and even had a very successful wood hauling business to earn money for the family. He loved to travel and owned many RV’s throughout the years, spending many winters in Laughlin Nevada. Ernest married Norma Lobato in 1957 and raised 4 children. Upon her passing in 2012, he joined fellow seniors in the area at the SRDA center. It is there that he met Aurora. They were married in 2013 and have lived happily together until his passing. His family has grown and he loved each and every one as his own. He will be missed dearly. May he Rest in Peace. Private Mass of Resurrection, 10:00 am, Wednesday. Inurnment to follow, Roselawn Cemetery. Service may be viewed through Live stream on Facebook at Romero Family Funeral Home, Pueblo and YouTube at Romero Family Funeral Home Pueblo.

Ernest C. Roybal, 89, of Pueblo, went to be with the Lord on January 18, 2021. He was preceded in death by his loving wife of 55 years, Norma Roybal; parents, Juan B. Roybal and Clorinda Lobato Roybal; step-son Patrick Martinez; sisters, Eloisa,... View Obituary & Service Information

The family of Ernest C. Roybal created this Life Tributes page to make it easy to share your memories.

Send flowers to the Roybal family.