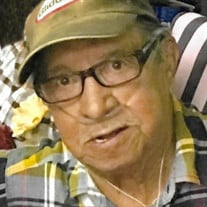 Ernest Gomez was born on June 19, 1930 in Segundo Co to the union of Juan Andres and Maria H. Gomez. He was reunited with his parents and siblings on April 26, 2020. Brothers, Fred, Justo, Louis Gomez; sisters, Margaret, Patsy and Sara. Everyone knew him as Mr. Gomez or just Ernie. He served his country as a proud Marine. He was a meat cutter by trade and taught his children how to pick, cut and prepare meat. Ernie and his brother were/are avid care enthusiasts, racing, collecting cars and awesome mechanics. Ernie passed down his knowledge to his children and made sure that his daughters were not just “Gas and Go Girls”. They could fix a flat and more. Besides working on vehicles, old and new, he loved to go fishing with his children and grandchildren. He enjoyed camping and hunting with family and friends. Ernie and his wife were very active in the very beginning of the Chicano movement here in Pueblo. He taught his children to fight for what they believed in and that they were entitled to all that the world had to offer despite the color of their skin. He would say, “If you want to be a bum, make sure you’re the best bum out there.” he enjoyed spending time with his grandchildren and was always ready to help them anyway he could. Ernie is survived by his children, Jessie Michelle (Tom) Arguello, Ernestine (Ern) Benavidez, Julian, (Jay) Gomez and Patrick (Pat) Gomez; mother of his children, Patricia V. Bueno; 14 grandchildren; 22 great grandchildren. He is also survived by his brothers, Andy, Richard and Tony Gomez; sisters, Linda Hubbard, Madelina Gurule; and his #1 sister, Mary Alice (Carmelita) Gomez. Thank you Auntie for calling him everyday and checking on him. Dad We Love You. Memorial Service, Friday, 2:00 pm, 1275 Zinno Blvd. Pueblo, Co 81006

Ernest Gomez was born on June 19, 1930 in Segundo Co to the union of Juan Andres and Maria H. Gomez. He was reunited with his parents and siblings on April 26, 2020. Brothers, Fred, Justo, Louis Gomez; sisters, Margaret, Patsy and Sara. Everyone... View Obituary & Service Information

The family of Ernest Gomez created this Life Tributes page to make it easy to share your memories.

Send flowers to the Gomez family.