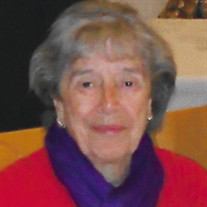 Elizabeth “Betty” M. Duran, 90, of Pueblo went to be with the Lord on May 2, 2020. She was preceded in death by her husband, Ben Duran; parents, Ismael and Cora Gonzales; and great grandson, Isaac. She is survived by her children, Jody (Donald) LeBrasse, Linda (Russ) Aumiller and Timothy Duran; grandchildren, Wesley Aumiller, Aaron (Jodi) Aumiller, Amber (Jason) Hemmestad, Zach (Kai) Duran, Sarah (Jessee) Purcell, Kallie Allen and Kyle LeBrasse; great grandchildren, Morgan, Ethan, Isiah, Elliot, Harper, Westin, Remy, Koa, Kash, Jersey, Morgan and Garron; numerous extended family and friends. Betty was born in Walsenburg Colorado. She and her only sister Eleanor, lived in Walsenburg during the Great Depression, the dust bowl days of the 1930’s as well as World War II. Betty graduated from Huerfano County High school in Walsenburg, Class of 1945, at the age of 15. She moved to Denver, where she was employed at the May Company Department Store for three years. She returned to her family home in Walsenburg to recover from a broken leg compound fracture, the result of a skiing accident in the winter of 1948. She met her loving husband on a double date and soon after they were married. Their life was blessed with their three children, seven grandchildren and twelve great grandchildren. Betty worked for the Welfare Department in Walsenburg and Pueblo, the Federal Housing Authority, the City of Pueblo, and the State of Colorado through the years. She retired in 1987 after thirty years with the Colorado Department of Revenue. She then became very active in the community becoming a member of the Southern Chapter of the Territorial Daughters of Colorado, the Southeastern Colorado Heritage Center, The Pueblo Archaeological and Historical Society, the Pueblo Railway foundation and the Fray Angelico Chapter of the Genealogical Society of Hispanic America. At her request cremation. Private family Celebration of Life will take place at a later date.

Elizabeth &#8220;Betty&#8221; M. Duran, 90, of Pueblo went to be with the Lord on May 2, 2020. She was preceded in death by her husband, Ben Duran; parents, Ismael and Cora Gonzales; and great grandson, Isaac. She is survived by her children,... View Obituary & Service Information

The family of Elizabeth "Betty" M. Duran created this Life Tributes page to make it easy to share your memories.

Send flowers to the Duran family.