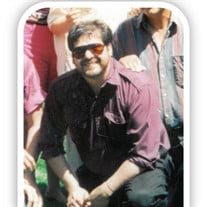 David Perea May 17, 1957 ~ August 29, 2021 It is with profound sadness and broken hearts, that our Beloved Husband and Father, David Perea, went home to heaven on August 29, 2021 in Aurora, Colorado. David was born in Pueblo, Colorado, to his parents Benjamin and Rachel Perea, on May 17, 1957. He was the youngest of 12 born into the Perea family. He graduated from Pueblo Centennial High School and received his Bachelor’s Degree from the University of Southern Colorado. He received his Master’s of Social Work from New Mexico Highlands University in Las Vegas, New Mexico. He began his career as a Clinical Therapist and worked in that field for over 25 years. Baboo, as he was known by his loving grandkids, loved being with and playing with his grandchildren and loved to hear them laugh. He enjoyed reading and studying the bible, philosophy, social sciences, religion and anything he could get his hands on. He enjoyed doing everything and anything with his “Lora Lina.” He was an anointed therapist and had an impact on countless youth. He had a compassionate and empathetic spirit and made genuine connections with others. With the most unique personality and ornery sense of humor, he was the ultimate prankster. David is preceded in death by both parents, Benjamin and Rachel Perea; Brothers Gilbert, Daniel, Manuel, Steve and Joe Perea; Sisters, Beatrice Garcia, Marcie Bain, and Maryanne Perea; Grandchild Sydney Boettcher; and nephews Benji Perea, Jr. and Andrae Gonzalez. Those who will continue to love and cherish his memory are his loving wife, Lora Perea; Daughters, Shay Perea (Ian Boettcher), Dawn (Matthew Glassman); Grandchildren, Tessa Boettcher, Paige Boettcher, Mason Glassman and Mila Glassman; Siblings, Ben Perea, Joe Thompson-Perea, Marlys Orozco and Mona Montoya; And a host of extended family and friends. Visitation will be held on Friday, September 3, 2021 at 10:00am at Romero Funeral ~ Chapel of Repose, 15150 E. Iliff Avenue, Aurora, Colorado. Memorial Service, Friday, September 10, 2021from 3;00pm to 5:00pm at Romero Funeral Home, 110 Cleveland St, Pueblo, Colorado.

David Perea May 17, 1957 ~ August 29, 2021 It is with profound sadness and broken hearts, that our Beloved Husband and Father, David Perea, went home to heaven on August 29, 2021 in Aurora, Colorado. David was born in Pueblo, Colorado, to his... View Obituary & Service Information

The family of David Perea created this Life Tributes page to make it easy to share your memories.

It is with profound...

Send flowers to the Perea family.