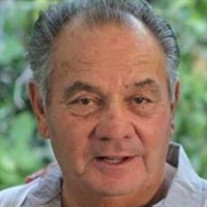 Clarence Garcia, 82, left this life on April 6, 2022. He was preceded in death by his sons, Nathan (2021) and Kevin (1982) Garcia. He is survived by his wife of 60 years, Virginia Garcia, daughter Jessie Garcia, Grandchildren Jessica, Christina, Dylan, Austin and Jacob, Great Grandchildren, Rypp and Derrick, his sisters Dorothy (Simon) Gonzales, Rica Sapeda and numerous in-laws, nieces and nephews. Clarence bid his first significant construction job at 25 and finished his contractor career at 75. He was the owner of Garcia Concrete, Pioneer Paving and KNJ Inc. throughout his 50 plus years as one of the first successful minority contractors in Colorado. He was driven to success at an early age. His drive was for his family, never money or status. He was the inspiration of unconditional love to his sons, grandchildren and to his daughter who has followed in his footsteps in the construction world. His never-ending support for whatever his family wanted or needed was rarely spoken but always evident to those that had the honor of knowing him. Clarence had an impact on many lives throughout Colorado, New Mexico and Pennsylvania. He enjoyed working on their property, taking care of the horses and cows and spending time with Vir and his friends in Avondale. He and Virginia’s focus the past 8 years was taking care of their son, Nathan, in their home after a traumatic car accident but traveled to Pennsylvania as much as they could to spend time with their daughter’s family. Even though the distance was far, it didn’t interfere with the closeness his grandchildren felt to “Grampo” as his subtle actions showed his love and devotion. As Vir would describe his heart - He Was There. Funeral Service, 10:00 am, Tuesday, April 19, 2022, Praise Church, 2000 Troy Ave., Pueblo, followed by Interment, Imperial Memorial Gardens.

Clarence Garcia, 82, left this life on April 6, 2022. He was preceded in death by his sons, Nathan (2021) and Kevin (1982) Garcia. He is survived by his wife of 60 years, Virginia Garcia, daughter Jessie Garcia, Grandchildren Jessica, Christina,... View Obituary & Service Information

The family of Clarence Garcia created this Life Tributes page to make it easy to share your memories.

Send flowers to the Garcia family.