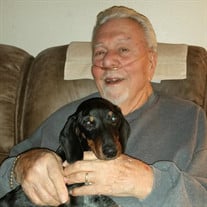 Charles Ray Wallace, of Pueblo West, passed away on November 24, 2020, at the age of 92 at Parkview Medical Center in Pueblo, Colorado. He was born on October 30, 1928 at Lincoln Hospital in Aberdeen, South Dakota to Raymond Kenneth and Elva Wallace. He was the oldest of five children. Charles is preceded in death by his parents, his wife Barbara, and sisters: Beverly Graves, Anna Belle Finke, and Vicki Castleberry. He is survived by son’s Kevin and wife Tracey of Pueblo West, Colorado; Farran and wife Glenda of Lamar, Colorado; four grandchildren: Dawn and husband Terrance Holmes; Brandalynn and husband David Anderson; Cameron and wife Rhawnda Wallace; Courtney and husband Corey Little; five great-grandchildren: Peyton, Ashton, Aubrieghana, Camden, and Braydin; brother Wayne and wife Dorothy of Chanute, Kansas and numerous nieces, nephews, extended family, and friends. Charles graduated from Newton High School in 1947 and on February 20, 1949 married his high school sweetheart, Barbara Lehnherr of Newton, Kansas. The young couple enjoyed traveling, dancing, spending time with friends and frequenting their favorite night spot; the Blue Moon Club in Wichita, Kansas. Charles’ love for Barbara was unconditional and had a depth and richness rarely experienced and envied by those that knew them. His commitment and devotion unwaivered during life and endured beyond her passing; without question, Barbara was his one and only true love. Charles and Barbara were happily married for 51-years and had two sons: Kevin Ray in 1952 and Farran Jay in 1955. Professionally, Charles enjoyed many life experiences such as a brakeman for the railroad, a traveling salesman for Triple-A Leather, and a long-standing career in retail working for companies such as Penny’s, Townsends, a 26-year career at J.M. McDonalds department store, Woolworth’s, and Chaffin, Inc where he retired in 1993. Charles was an influential community ambassador and highly respected by many local businesses and professional organizations. Over the years, he received many accolades and was known for his hard work, dedication, and commitment to service. Additionally, his commitment to service extended beyond his local community where he served his state and country as a Sergeant in the Kansas Army National Guard. In 2012, Charles left his home in Dodge City, Kansas to be closer to family in Pueblo West, Colorado and continued his faithful following as a member of the Kirkwood Presbyterian Church in Penrose, Colorado. To his friends and family, Charles was known as a tender man with selfless devotion. He touched the lives of those around him in impactful ways and even the smallest interaction left an indelible mark lasting for generations. He was a kind and genuine man who found value in God, relationships, and taking care of those around him. Cremation has taken place and per the family’s request, a memorial service honoring Charles will take place at a later date.

Charles Ray Wallace, of Pueblo West, passed away on November 24, 2020, at the age of 92 at Parkview Medical Center in Pueblo, Colorado. He was born on October 30, 1928 at Lincoln Hospital in Aberdeen, South Dakota to Raymond Kenneth and Elva... View Obituary & Service Information

The family of Charles R. Wallace created this Life Tributes page to make it easy to share your memories.

Charles Ray Wallace, of Pueblo West, passed away on November...

Send flowers to the Wallace family.