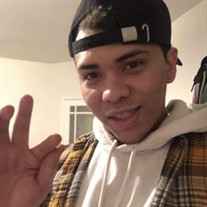 Brendan Jordan Johnson, 27, of Pueblo passed away on September 10, 2021. Beloved father, son, brother, grandson, nephew, uncle, cousin and friend to so many. Brendan was born in Pueblo, CO on March 28, 1994, and resided in Pueblo most of his life. As a young boy he loved playing sports especially football and basketball. He met some of his lifelong friends on the football field and basketball court, from playing with the undefeated Regency Knights, to the South-Central-League winning Central Wildcats basketball team. After high school Brendan moved to Las Vegas to attend UNLV. There he met many wonderful new friends, learned to become more independent, and became father. Before returning to Colorado, Brendan briefly lived in California where he said he always wanted to be near the beach. Brendan was an avid fan of all sports and loved going to watch his favorite teams play. He also enjoyed playing basketball and hanging out with family and friends. He was silly, sweet and strong, kind and generous. He loved his son, family, and friends deeply, He will be forever missed and always loved by all those left behind to cherish his memory. Brendan was preceded in death by his best friend, Karlos “Los” Torres; aunt, Alisha Coca; and great grandparents. He is survived by his son, Jacob; parents, Eric and Angela Johnson; brothers, Eric Jr (Miranda) and Christian Johnson; nephews, DeSean, Kameron and Julien; godson, Malachi; and special cousin, Shanae; grandparents, Steve & Irene Coca, Bob & Karen Hatchett and James & Anne Johnson; mother of his child, Esperanza; special friends, Kelci and Rachel; numerous aunts, uncles and cousins; extended family and friends. He will be forever loved and deeply missed. Memorial Service, 10:00 am, Friday, Romero Family Funeral Home. Service may be viewed through Live stream on Facebook at Romero Family Funeral Home Pueblo and YouTube at Romero Family Funeral Home Pueblo.

Brendan Jordan Johnson, 27, of Pueblo passed away on September 10, 2021. Beloved father, son, brother, grandson, nephew, uncle, cousin and friend to so many. Brendan was born in Pueblo, CO on March 28, 1994, and resided in Pueblo most of his... View Obituary & Service Information

The family of Brendan Jordan Johnson created this Life Tributes page to make it easy to share your memories.

Brendan Jordan Johnson, 27, of Pueblo passed away on September...

Send flowers to the Johnson family.