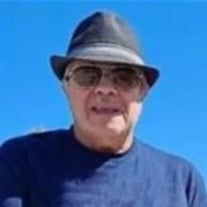 Bill Abel Lucero passed from this life suddenly October 2nd, 2021. Born March 24th, 1945, in Denver Colorado to Bill Sr. and Rose Lucero. He was raised in Walsenburg Colorado by his grandparents Jose Lee and Julianita Lucero. Bill married Orlinda Trujillo in August of 1963 and moved to Denver Colorado where he was a Master Hand Engraver for 42 years. He is preceded in death by his parents, grandparents, Dan Soto who was like a father to him, in laws Pedro and Oralia Trujillo, siblings, Dennis Soto, Susan Montoya and Robert Lucero. His is survived by Emma Soto who is like a mother to him, his compadre Earl Burns, his aunt Julia Perez, his wife of 58 years Orlinda, children; Mike (Belinda), Roland (Rose), Lorraine (Gerald) Cisneros, siblings; Dolores (Felipe) Morales, Gloria (Ramon) Hernandez, Leonard Lucero, Julie Rivera, Diane (Wood) Rayfield, Sharon (Joe) English, Nick (Cindy) and Ron Soto; brothers in law Sonny, Henry (Cheryl), John (Cecilia) and Paul Trujillo, cousins who were more like sisters to him; Gloria Gomez and Liz (Glen) Sweitz, grandchildren: Mandy, Gary (Maria) Austin, Cameo, DJ Castro, Roland Paiz, Anissa Lucero, Lexie Baca, Janelle Olivas, Jessica (Glen) Payne, Phillip (Robyn) and Andrew (Sierra) Cisneros, great-grandchildren; Jazlyn, Christian, Landon, Savannah, Joseph, Alex, Zachary, Mryia, Roland Anthony, Isabelle, Ezekiel, Gunner and Lyla, numerous cousins, nieces and nephews, extended family and friends. Durning his 42 years as a Master Hand Engraver he designed, hand crafted and engraved numerous buckles, bits, spurs, saddle hardwear, lighters and other speciality items. His work can be found in products from Ricardo, Johnson & Held Ltd., Colorado Silver Star, Rockmount Ranch Wear, Renalde Crockett & Kelly, and amoungst family and friends. After retirement Bill continued to nurture his artistic talents by drawing daily. His designs can be found around the house on various smaill pieces of paper or whatever he could find to draw on, often giving them away to family and friends. He especially loved to leave small drawings under his mother in law’s placemat for her to find every morning. Bill was an avid Raider fan despite all the Bronco fans in his family, including his wife. He made the best green chili and won several chili cook-off contests. He had an extensive music library and loved to listen to and record music. He enjoyed classic cars and attending car shows. His pride and joy were his children and watching them grow families of their own. He especially enjoyed going for rides with his sons in their classic cars and watching football with his daughter. Bill was very quick witted and liked to joke and tell stories, always laughing and with a big smile on his face. He will be greatly missed by all. Celebration of Life, Sunday, October 10, 2021, at 11 AM, Fox Theater, 715 Main St, Walsenburg, CO

The family of Bill Abel Lucero created this Life Tributes page to make it easy to share your memories.

Send flowers to the Lucero family.